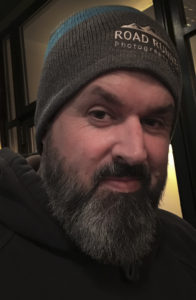 Jeff spent the 70’s using a Kodak 126 to shoot family photos. The 80’s saw Jeff “stealing” an air force buddy’s Minolta X300 focusing on shooting candid and street photography. He upgraded to his first SLR while stationed in England, never putting it down. Jeff never put down the rumor that he was CID. Life and work precipitated a 20-year break. For the last 10 years Jeff has been shooting avidly – landscapes, urban decay, macro.

Four years ago Jeff became President of the Loudoun County Photo Club. Jeff earned the title of LPC Photographer of the Year twice and was awarded Photo of the Year by members in 2016. Most recently he has been a Tour and Meetup Assistant with Road Runner Photography Tours.

Over the last few years Jeff’s passion has turned to Avian Photography, adding peacefulness to his graying years.