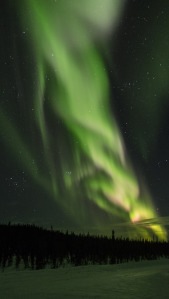 Capturing the aurora… the illusive, search for lights in the night sky.

Most frequently seen above the magnetic poles of the Earth, these circles of high-density auroras lie between the latitudes of 60° and 70° north and south, more or less in line with the Arctic and Antarctic circles. The auroral activity increases when high solar activity, such as sunspots, disturbs Earth’s magnetosphere.

Solar activity is created by complex magnetic fields on the sun’s surface, which ejects billions of tons of plasma (coronal mass ejections (CME)) at extraordinarily high speeds, sending fast-flowing “gusts” of charged particles out from the sun.

The light of auroras is emitted when charged particles in the solar wind excite the electrons of atmospheric atoms through collisions. As the electrons return to their original energy levels, these atoms, primarily oxygen and nitrogen, emit photos of visible light of distinct wavelengths to create the colors of the auroral display. The wavelength of the light depends upon the electronic structure of the atoms or molecules themselves, and on the energy of the charged particle colliding with the atom or molecule.

Solar wind is a stream of plasma, charged particles created by collisions of atoms in the intense heat of the sun’s atmosphere, or corona. These charged particles, mostly protons and electrons, have their own magnetic field. They reach Earth at speeds of 350 to 400 km per second. The Earth’s magnetosphere forms an obstacle to the solar wind, which deflects them and ultimately channels them toward the North and South poles.

The electrons of the atmospheric atoms collide with the particles of the solar wind to become excited. As the electrons return to their original energy levels, these atoms emit visible light of distinct wavelengths, to create the colors of the display that can be seen. The specific atmospheric gas and its electrical state, and the energy of the particle that hits the atmospheric gas determine the colors. The atmosphere consists mainly of nitrogen and oxygen, which emit the characteristic colors of their respective line spectra. Atomic oxygen is responsible for the two main colors of green and red. Nitrogen causes blue and deep red hues. Additionally, altitude can effect the color of the auroras. The strong green light originates at altitudes of 120-180 km. Red occurs at even higher altitudes, while blue and violate occur mostly below 120 km. When solar activity is extremely high, reds can be found at lower altitudes of 90-100 km. Although rare, entirely red auroras can sometimes be seen at low latitudes, often appearing to be fire on the horizon. 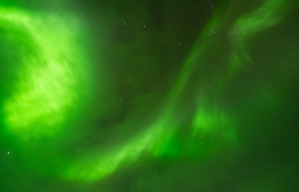 Although solar winds occur regularly, the intensity of the activity is not constant, but follows an eleven-year cycle of activity. 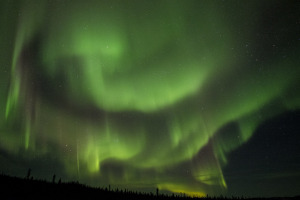 Auroras, although present throughout the year depending on solar activity, can only be seen in the night sky near the North and South poles during the relative winter months. In the northern sky the lights are called the Aurora Borealis, where as in the southern sky, they are known as Aurora Australis.

Capturing auroral images is challenging, as travel to remote locations is generally required. Because the aurora is a winter phenomenon, being prepared for frigged conditions is necessary. This effects both you, the photographer, but also your gear. Camera gear is generally not happy in extreme cold conditions; batteries die faster and the mechanisms seize up. When you go into a warming shed or facility to warm up, the gear will steam, but because it is so cold, the steam will turn to frost instantly. It can take hours for the gear to reach the ambient temperature of the room and be usable again. This could be the difference between capturing the aurora and missing it entirely. For yourself, being prepared to stand in the extreme cold also poses some challenges because it requires multiple layers of heavy clothing, thick gloves, balaclavas, hats, and scarves. Simply moving can be difficult. Exposing your fingers to change camera settings or to manipulate your metal camera body or tripod can be painful, sending burning cold through your finger tips.

Even with these challenges, there is nothing like experiencing this wonder. Sometimes you just have to sit back and appreciate the moment… of course while your camera is working!