One of the first books on photography that I remember seeing as a child was by a German photographer whose name I cannot remember. However, the title of the book, “The Laughing Camera” (in German, of course), I remember well because the photographs were efforts at showing some of the comedic sides of life and living. If I think hard about that, the book would have been from the post-World War II fifties and probably served a number of purposes including sustaining smiles in hard times.

At the very least, the laughing camera’s photographs told stories, either momentary or long lasting.

Not every photograph can tell a story or portray a narrative. Consider most abstract photography, for instance. And I like taking abstract photos. There is something tremendously pure about them and their aesthetic.

But I do like trying to set up a shot, when I can, or in the moment of spontaneity, that evokes a story or a question. That it should also produce a smile or a chuckle would only be added benefit. 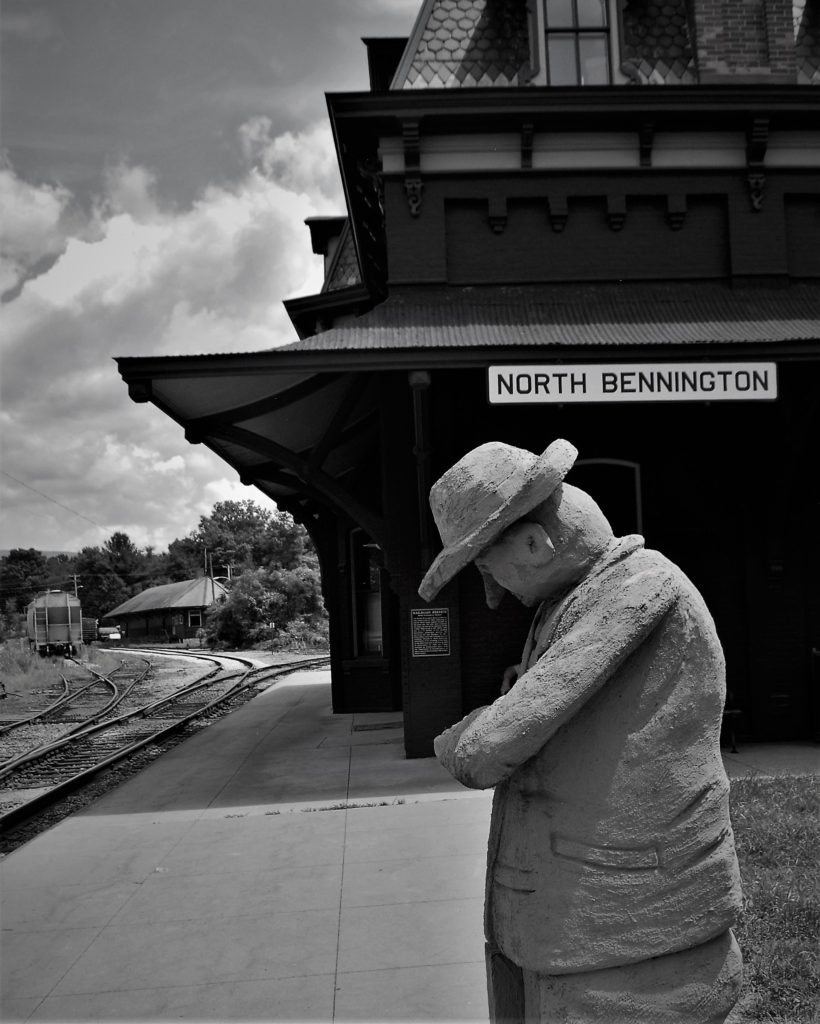 This image seems to me one of those types that can evoke a grin. The town of North Bennington, Vermont annually promotes a sculpture festival where artists display their works throughout the town. As so many Vermont towns do, North Bennington reeks of charm and quaintness. And I know of only one other small community that falls in love with sculpture and sculptures annually – outside of Hickory, North Carolina.

Here the sculptor captures the stance and exaggerated presence of the solitary commuter. The train in the background isn’t going anywhere. I put the two items frozen in time (plaster and unmoving train) together forever in their concern about time and its passing. The title, A very long wait for Godot, hearkens back to the absurdist play, Waiting for Godot by Samuel Beckett.  A little added contrast and “vignetting” finished what the composition had already started – the capture of a little bit of humor and absurdity in an oft too tragic world.

The last laugh would either be on me or on some collective that I couldn’t begin to name. As the shot was announced at a recent camera club meeting, the speaker referred to it as “A very long wait for Go Dot.” I almost quipped out loud, “dot com.” But instead, I chuckled inwardly at the additional layer of humor that another interpretation provided.

It’s All About the Details! – Walter Stinnett – Guest Blogger