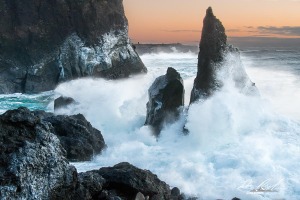 We just returned from our second tour to Iceland this winter.  Our first tour was in December and our second was about a month later in January.   In this case what a difference a month makes. During our first trip temperatures were almost summer like and we had a lot more rain than we would have liked.  A month later the temperatures were in the teens for the early part of our tour and instead of rain we had snow.

The good news was we were finally able to get into the ice caves.  Denise has posted images from the Ice Caves on our Facebook Page.

The shot above was from our first afternoon with the group.  It was very windy and as a result the seas were quite stormy.

We will return to Iceland this August and we still have one spot available!

The Return of Mother Nature