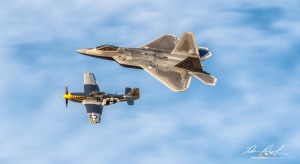 This past weekend we held a Meetup at the Patuxent Air Expo 2016. Originally the Blue Angels were scheduled to be the main attraction, but their appearance was canceled due to recent changes involving how many weeks they can perform without a break. I was obviously disappointed and suspect many others were as well. As they say the show must go on, and Patuxent River Naval Air Station put on an excellent show!

The star attraction was the F-22 Raptor. I love airplanes of all types, but to quote a friend of mine who is a pilot, “that plane does things an aircraft should not be able to do”. In the shot above the Raptor is participating in the Heritage Flight.

In regard to the shot above, I always shoot propeller driven aircraft at shutter speeds low enough to capture the movement of the props. This is usually around 1/125 of a second. Doing this means that a lot of my shots are going to be blurred and otherwise unusable. It just depends on how accurate my panning is compared to the speed of the aircraft, often times not as accurate as I wish. I have suggested to other photographers in the past that their prop shots should not show frozen propellers. This suggestion is often not welcome. However, when I look at the work of top notch airplane photographers the props are not frozen.

If you notice the shot above is not the correct aspect ratio for a DSLR. It looks like a panorama crop. It’s not a crop. The shot showed the planes too close to the left side of the frame, so I added 5 inches to the canvas size on the left side of the image. Then I used the selection tool to select the blank part of the new canvas and then used the content aware fill to extend the sky.