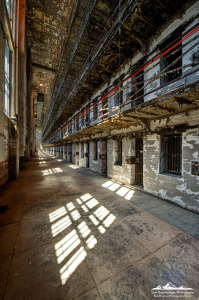 Last weekend Denise and I took a road trip with a couple of other members of our Meetup to the Ohio State Prison at Mansfield.

It’s a wonderful old building that looks more like a castle on the outside than a prison. We had signed up for the “photography tour” at a cost of $150.00 per person. Never having been there, I did not have any concerns and was looking forward to the experience. Denise and I do tours at places like Eastern State Penitentiary and the Trans-Allegheny Lunatic Asylum and while the pricing is comparable, both of these other places provide additional value for the money. It could be freedom to work with minimal interaction with other tourists or access to places that are off limits to the other guests. But in any case we have always felt there is extra value in paying more than the average tourists.

That changed this past weekend. We arrived and stood in line with others who were paying $9.00 for general admission. When it was our turn we paid $150.00 a person and was told to follow the tour route. That translated to having to wait between 5 and 10 minutes at nearly each shot waiting for the tourists to be out of the shot. Sometimes I elected not to take a shot because I just got tired of waiting the the people to get out of the way.

To be fair to Mansfield we did go during the summer busy season and after we expressed some concern about being over charged just because we had tripods, we were told they could take us to some places that were not part of the tour. By that time we were just over it and wanted to get back on the road for the several hour drive that was ahead of us.

If I had it to do over again I would have left the tripod in the car and just shot at a high ISO and used the vibration reduction feature on most of my lenses.

So if you decide to go, I recommend that you go off season and get a clear understanding of what you get in exchange for your hard earned dollars!