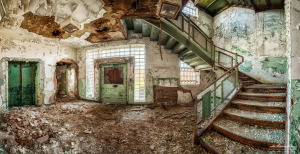 Panoramas are often an effective way to showcase the grandeur of a vast landscape. A photographer can often show more in a wide aspect panorama, instead of just stepping backward or using a wide angle lens. I love shooting panoramas in the great outdoors but I also find ways to use this technique on other types of photography as well. In the image above I shot 5 vertical frames of the lobby inside the former Women’s Auxiliary Building at the Trans-Allegheny Lunatic Asylum. I used a Nikon 14-24mm lens at 14mm on a full frame sensor. While that lens has a very wide field of view, it was not wide enough for me to capture the entire scene in one shot.

Back in the film days you would use a special camera such as the X-Pan. This was a camera that used 35mm film and would expose the image at 24mm x 65mm, instead of the traditional 24mm x35mm that is typical for 35mm cameras. Ten years ago I dreamed of owning an X-Pan, but the price of the bodies and lenses was prohibitive. Many used 35mm film cameras have become fairly inexpensive but if you look around a used X-Pan is not one of them. The only advantage I can think of today where a film camera such as an X-Pan would have the advantage over digital is with a fast moving subject. Slow moving subjects such as clouds and water work just fine for digital panoramas.

So if you want to start shooting panoramas with your digital camera you will need to learn a little about Parallax. Really Right Stuff has a great tutorial on their site. My panorama rig is from Really Right Stuff and while not inexpensive, in my opinion the quality is the best and worth the investment. There are less expensive options for a Nodal Slide and other assorted gear if cost is a factor.

Years ago I had two or three programs I used for assembling panoramas, because when one program failed to properly stitch the panorama, another program would often do the job. But in the last few years Photoshop has gotten so good at this feature I have not needed the other programs when I switched my processing from a PC to Mac. So today all my panoramas are assembled in Photoshop.

Some cameras (including my Fuji XT-1) will shoot handheld panoramas, but the results are not always precise and in the case of my Fuji, it saves the result as a Jpg file instead of a RAW file. I occasionally use the panorama feature on my Fuji, but when the shot really counts I use my tripod and panorama rig to get it right.

A Different Type of Landscape

What do you do on a Road Trip?