In the past four years, I’ve been fortunate to visit Katmai National Park on three occasions, most recently in early July 2017.  Photographers are drawn to Katmai by the brown bears that gather at Brooks Falls and along Brooks River; the bears are drawn by thousands upon thousands of sockeye salmon, returning to spawn a new generation in the same headwaters where they and uncountable previous generations started life.  With time and study, and the help of references prepared by the National Park Service, you can learn to identify individual bears, and learn some of each bear’s history.  Once you’ve reached that point, you’ve made a connection that greatly adds to your appreciation of  what you’re seeing at Katmai — you’re no longer looking at just any bear, you’re looking at Otis (designated by the Katmai as Bear 480), Grazer (Bear 128), or one of the many other bears cataloged and monitored by Katmai National Park researchers and rangers.

Otis was the first Katmai bear I learned to identify as an individual, and this post deals with him; I’ll return to another Katmai bear, Grazer (and her cubs), in a subsequent post.  Otis is now more than 20 years old, having been classified as an older subadult / young adult in 2001; he may be the oldest bear who continues to frequent Brooks Falls.  He’s probably the best-known Katmai bear.  Distinguishing features include a floppy right ear that appears somewhat smaller than the left; missing teeth; Although Otis had been a dominant bear for many years prior to 2013, successfully claiming the “jacuzzi” and other prime fishing spots at Brooks Falls, by 2013 younger bears were more willing to challenge and displace him from those prime spots. 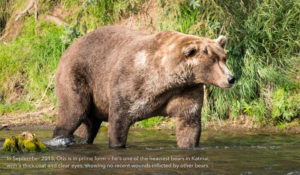 In response to these challenges, Otis has adapted by changing his primary fishing location and technique.  He now spends much of his time in the “far pool” opposite the Brooks Falls viewing platform, using a fishing technique unlike any other bear at Brooks:  he literally sits and waits for the salmon to come to him.  No mad dash, no dramatic lunge for Otis — he is an admirable example of patience and conservation of energy.  He simply waits until he feels the presence of a fish, traps it beneath a paw, and then quickly retrieves his meal.  Often, he will sit with his mouth wide open, leaning forwards just a bit; perhaps these refinements carve a few milliseconds off his reaction time.  Using this approach, Otis has captured and eaten upwards of 40 salmon in a single day — that would mean a peak intake of around 180,000 calories a day when the salmon are just coming in from the Pacific (salmon lose weight after leaving the ocean, and a late-season, spawned-out salmon will have only about half the nutritional value it once had).  His low-energy fishing technique ensures Otis puts on substantial weight during the salmon run.

In 2013, Otis came out of hibernation somewhat thinner than normal.  But by September, he had gained hundreds of pounds and was in top form, with a a glossy, thick coat, clear eyes, and an overall appearance described as “walrus-like.”  He was one of the most successful (fattest) bears in Katmai, and was well-prepared to survive the tough Alaska winter.  2014 was also a good year for Otis — towards the end of the season, he was named the fattest bear in Katmai.  In 2016, I returned to Katmai, with Denise Silva and Geff Bourke, and Otis returned, too; he showed good weight, but displayed fresh wounds that gave evidence that other bears were more willing to directly challenge Otis.  Despite those conflicts, Otis was again named the fattest bear in Katmai.

Most recently, during Road Runner’s July 2017 tour to Katmai, I had additional opportunities to observe Otis at Brooks Falls.  For the first time in my experience, he showed extensive, significant wounds that may indicate an escalation in conflicts with other bears.  He also did not appear to have gained as much weight as he had by the same time in 2016.  It’s too early to know what, if anything, this portends for Otis’s future.  The ultimate outcome won’t be known until next year. 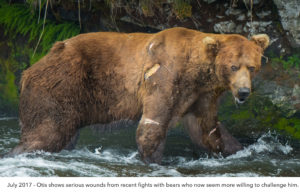 If you’d like to learn more about Otis and other bears observed along the Brooks River, check out the 2017 edition of Bears of Brooks River — A Guide to Their Identification, Lives, and Habits.  Even better:  join Road Runner’s July 2018 trip to Katmai National Park and see Otis and his friends in person.  We will be staying at the world-renowned Brooks Lodge, in the heart of Katmai bear country, arriving July 4 and departing July 7, giving you the best possible access to the bears and more than enough time to capture extraordinary images and memories.  For all the details, see Katmai National Park — Bears and Salmon Expedition.