Although I’ve done six or seven FB posts of photos of some of the places we visited, I wanted to do a more detailed description in one place because when I researched the trip there were no shortages of sites telling a traveler what towns to visit, but very little useful guidance on constructing an itinerary that would allow you to maximize your time in this lovely region.  So here is the information I pulled together. Hopefully it will help folks planning a trip to Umbria.

In late summer, dozens of descendants of two Italian brothers, separated by the Atlantic more than a century ago, gathered – many for the first time – in the quaint village of Scheggino, in the heart of Italy’s Umbria region, to celebrate the marriage of the daughter of one of my French-Italian second cousins.  Apart from the beauty and serenity of the location, Scheggino, only 90 miles north of Rome, offered convenient access for both Italian and international guests, including my U.S. cousin and me.  Most guests stayed at the Antica Torre Del Nera boutique hotel, where the wedding ceremony was held, or at the nearby Antico Casale Urbani country resort, the site of the wedding reception.  The Antica Torre Del Nera, near the center of the village, sits alongside a softly flowing river, complete with resident ducks, geese, and swans, while the upscale-rustic Casale Urbani is situated ten minutes away on the hillsides of a 15th century farm estate.

My several past trips to Italy had taken me to many of Italy’s most popular locations, but not Umbria.  Italy’s only region without a seacoast or international border, Umbria is bypassed by many tourists who glimpse the province only from the seats of trains traveling between Rome and Tuscany, Umbria’s northern neighbor.  Yet Umbria, the so-called “Green Heart of Italy,” offers much of the same scenic beauty and charm of Tuscany’s towns and villages, but in a much quieter and far less crowded setting.  Many of the region’s towns and villages date as far back as Etruscan days and contain a fascinating mix of Etruscan, Roman, and medieval sites.  Also, because of Umbria’s compact size, a visitor by car can easily construct road routes that connect multiple Umbrian towns in day trips, although the hilltop setting of many of Umbria’s towns and villages can present its occasional driving challenges (especially when you’re tailgated by impatient Italians).  Presented with this family-related travel opportunity, we decided to combine our time with family and friends at the wedding events with an exploration of as many of Umbria’s towns and villages as our eight days there would allow.

Our first stop outside Scheggino was Spoleto, only 10 miles away, one of the best known of the Umbrian towns and home of the annual international summer arts festival.  Spoleto’s main attractions – its duomo, the Ponte della Torre bridge (Bridge of Towers) constructed in the 14th century, and the adjacent Rocca Albornoziana fortress – can be reached by walking hundreds of steep steps, taking a series of escalators which stop at each level of this walled town, or, as we did, a combination of both.  The Albornoziana fortress, the uppermost of these sites, offers the best 360-degree view of Spoleto and its surrounding areas.

We spent half a day in Spoleto before starting back to Scheggino to rejoin our relatives, but along the way decided to venture a bit farther to visit the tiny village of Norcia in southeastern Umbria.  Considered the culinary capital of Umbria, Norcia’s main street is lined with dozens of food shops, many carrying the pork, olive oil, and truffle products for which the region is well-known.  Sadly, the earthquakes that struck the region in 2016 and 2017 damaged or destroyed some of Norcia’s structures, including its basilica, and the central square of the town was still in the midst of reconstruction as of the summer of 2019. 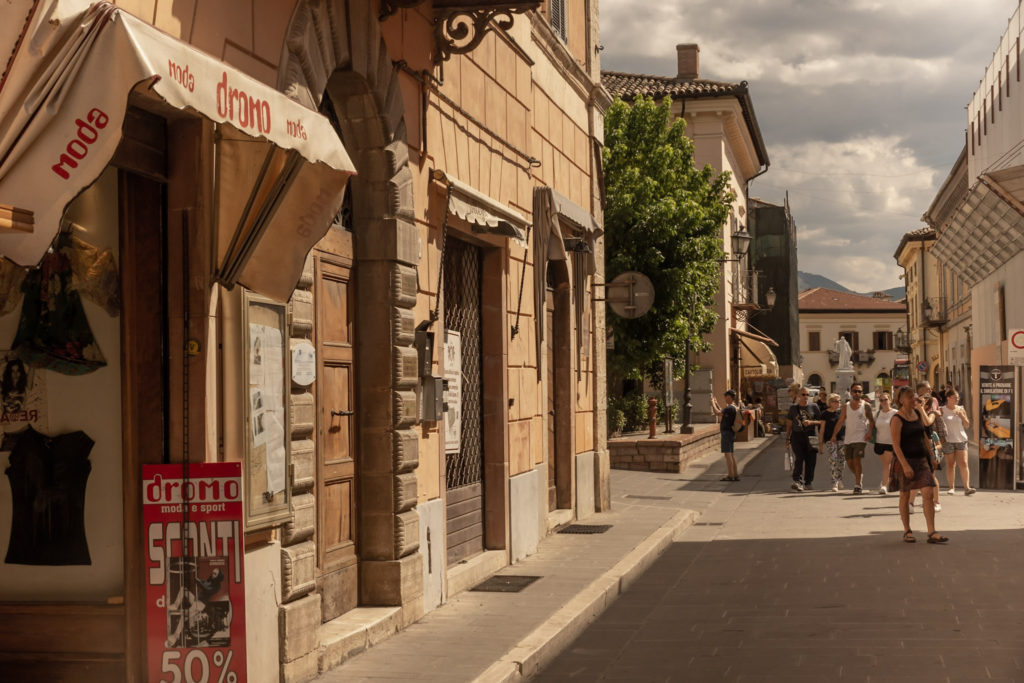 Family events the following day left us more than enough time to explore Spello which justifiably labels itself the “City of Art and Flowers.”  Strolling through the lower archway to Spello’s ascending main avenue, seemingly every side street, alley, and building is bedecked with flowers.  Although May and June are said to be peak flower season in Spello, there was no shortage of colorful blooms at the end of August, as evidenced by visitors stopping to capture scene after floral scene with their cameras or phones. 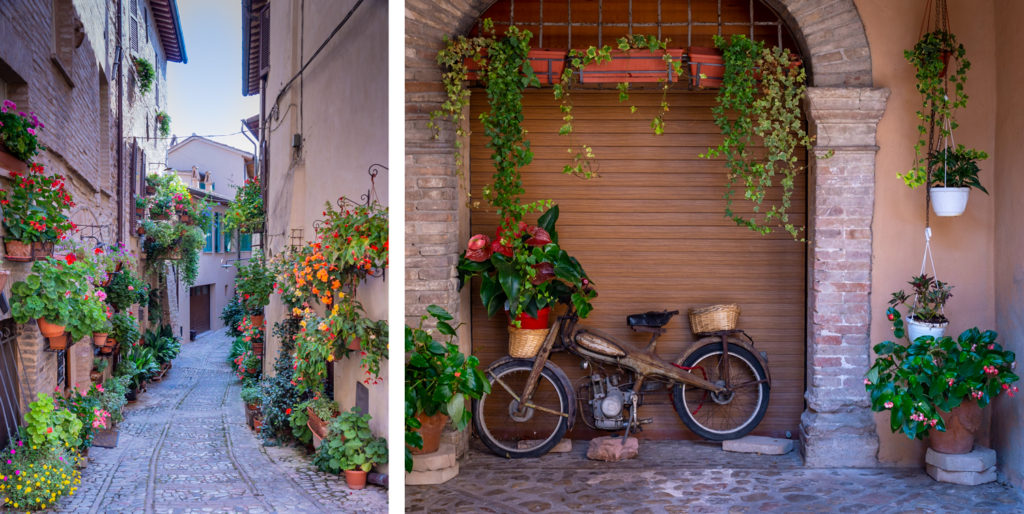 The next day was our most ambitious, beginning with stops at Trevi and Montefalco, hill towns a few miles apart.  Trevi sits in a spectacular hilltop setting ringed by olive groves – a classic postcard image (out of endless such possibilities in Umbria).  As we strolled through the small town, we heard the commingled sounds of musical instruments being practiced as Trevi’s arts center was preparing to host one of a series of musical performances held at various sites in Umbria.Nearby Montefalco offers colorful streets and some of the most sweeping views of the Umbrian landscape.

After a combined three hours in Trevi and Montefalco, we proceeded on to nearby Assisi, one of the most visited of Umbria’s towns, wh

ere we were joined by some family members.  Best known for the massive Basilica of Saint Francis, Assisi is the home of more than a dozen other churches, many beautiful in their own right, as well as Roman ruins and medieval sites. 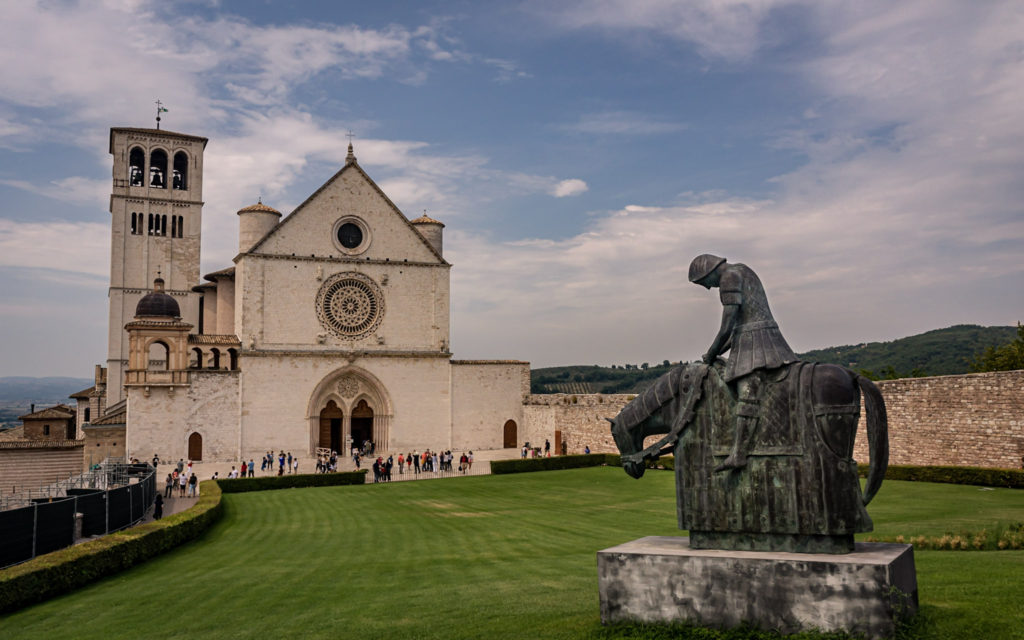 After an afternoon at Assisi, we decided on an impromptu visit to another town, Bavagna.  As dusk turned to night, we paused at Bavagna’s colorful old square, followed by a delightful meal at the Il Grottino restaurant tucked away on one of the town’s narrow side streets. 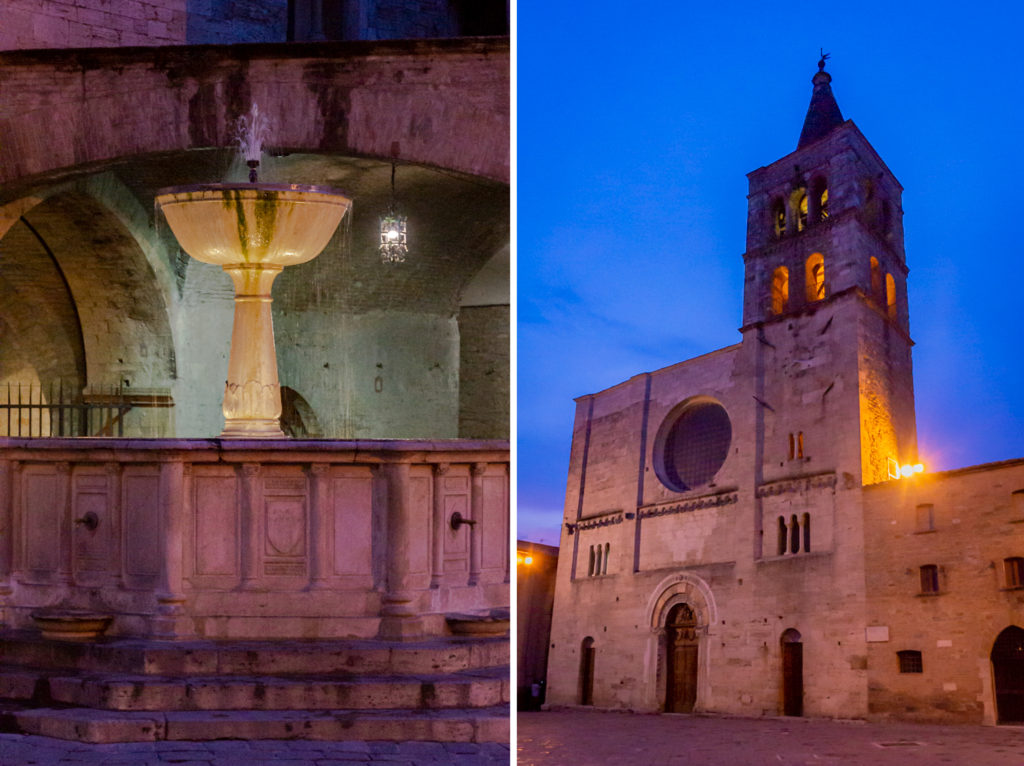 The following day we headed west from Scheggino, first to Todi and then to Orvieto.  Like so many other Umbrian towns, Todi sits atop a steep hill.  Many visitors to this picturesque walled village will park at the main public lots and take a funicular up into the town’s main center.  In addition to two impressive cathedrals, Todi’s precipitous setting offers yet another expansive view of the surrounding countryside.

Along with Spoleto and Assisi, Orvieto is considered one of the “must see” attractions in Umbria.  Rising up on high cliffs and dating back to Etruscan times, its main sites are accessible again by taking a funicular.  Orvieto is home to one of Italy’s most impressive duomos.  Although not as ornate in its interior as many of Italy’s other famed cathedrals, its mosaic facade is one of Italy’s most stunning.   Visitors to Orvieto also typically will stop at the Pozzi di San Patrizio (St. Patrick’s Well), one of the first sites you encounter when entering the town.  The 16th century well is a double-helix geometry 175-feet deep, with 248 well-lit steps, so that the way down and return trip are along distinct sets of ever-winding stone staircases.

The final day of our Umbrian adventure took us to Gubbio and Perugia.  If one had to choose just five or six Umbrian towns to visit, Gubbio should be on the list.  One of the larger Umbrian towns (population about 30,000), Gubbio, in northern Umbria, dates back to pre-Roman days and figured prominently in Italy’s medieval history.  Many of Gubbio ’s well-preserved main buildings were constructed from gray limestone, but the town’s central square is a mix of medieval, Gothic, and Renaissance motifs.  The massive Palazzo dei Consoli looms over the landscape, and the town’s duomo, constructed in the 12th century, is another popular site to visit.  Gubbio’s colorful streets, with their numerous pottery shops, harken back to the town’s status as one of Italy’s main pottery production centers during the Renaissance.

About an hour south of Gubbio is Perugia, the capital of Umbria and by far its largest city.  Known internationally for a major university and other schools, Perugia’s city walls and buildings evidence the common mix of Etruscan, Roman, and medieval influences.  Although our time in Perugia was too limited to visit many of Perugia’s main sites spread across the city, we lingered and people-watched in the Piazza IV Novembre, the bustling, huge open square that features Perugia’s impressive Fontana Maggiore fountain and is surrounded by the city’s duomo and Palazza dei Priori which houses several museums, including the Umbrian National Gallery.  A drenching late afternoon summer thunderstorm did not deter us from scurrying between shops and restaurants along the fashionable Corso Vannucci, the city’s main pedestrian street.

As we left Scheggino early the next morning to drive the three hours south to the renowned Montecassino Abbey, where we were joined by several family members, we reflected on our time in Umbria.  Although twelve towns in eight days was an ambitious itinerary, we never felt rushed.  The scenic towns perched on sun-washed hilltops, the countless green valleys, the vibrant hues of flowers along cobblestone streets and alleys, the pizza and pasta at welcoming eateries, and the simple pleasures of strolling and mingling with Umbrian residents, left us with eight days of smiles and lifelong memories.

Paul Laurenza is a writer and photographer living in Vienna, Virginia.

How Others Experience a Destination